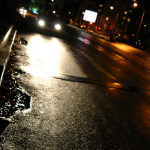 Around 400 car cruisers turned up to have one last drive through Blackwood High Street on Thursday.

Gwent police led and organised a “last cruise” through the High Street before leading the boy racers to the council’s Pontllanfraith House.

Drivers got a chance to get up close and personal with a range of car displays and were the first to watch the full-length 30-minute ‘COW’ road safety film which highlights the dangers of texting and driving.

Blackwood Neighbourhood Inspector Kevin Childs, said: “Car cruising in Blackwood has been occurring for more than 25 years, and it’s time that residents were able to visit local stores on Thursdays, without being intimidated or stuck in traffic.

“We don’t have any problems with drivers who look after and care for their cars, but we do strongly object to the behaviours that can often come along with car cruising.

“During a recent operation over five Thursday nights, we caught over 250 drivers speeding.”

The police have obtained an order to close off the High Street from 7pm to 4am every Thursday night for the next 18 months.”

Do you want to become a community reporter?